Combating Cheating in the Classroom

Have you ever heard of websites such as Course Hero, Quizlet, or Koofers? If you have, you may know that while these websites can provide some advantages for honest students, they also provide an opportunity for some students to cheat. A recent presentation by a professor at Brigham Young University (BYU) highlighted several concerns about these study websites. After searching the websites, thousands of assignments, quizzes, and exams were discovered posted on the various sites. While it may be okay to post student notes, flash cards, or even class slides depending on professors’ instructions, posting assignments, quizzes, and exams is likely a violation of copyright laws.
Read more »
Posted by Ryan Sommerfeldt at 8:47 PM No comments:

Whose Job is it Anyway? Are Auditors Expected to Detect Fraud? 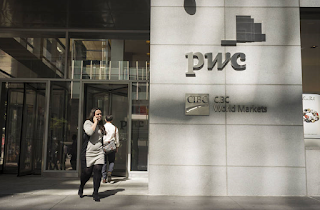 A recent article in The Wall Street Journal details what could be one of the only legal cases from the great recession to actually go to trial. Taylor Bean & Whitaker Mortgage Corp. is suing PriceWaterhouseCoopers LLP (PWC) for $5.5 billion dollars claiming that PWC was negligent in auditing one of their clients. While PWC didn’t audit Taylor Bean, they did audit a bank with which Taylor Bean did frequent business--Colonial Bank (Colonial). Taylor Bean overdrew its accounts with Colonial for several years to cover cash shortfalls, then sold fake pools of mortgages to Colonial in order to cover up the fraud. Taylor Bean claims PWC was negligent in auditing Colonial, and that the collapse of Colonial led to them losing billions of dollars. The real question is how liable should auditors be for detecting fraud?
Read more »
Posted by Ryan Sommerfeldt at 11:18 AM No comments: 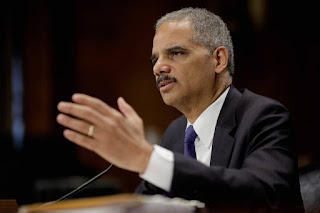 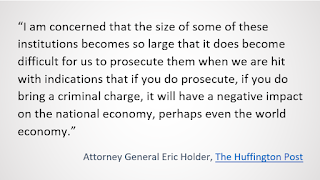 See this previous post for a further discussion on companies being too big to fail.
SaveSave
Posted by Ryan Sommerfeldt at 9:37 PM No comments:

Fraud Prevention in the Banking Industry 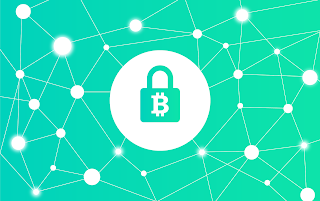 According to a recent article on Bloomberg, banks are considering using blockchain technology, the same platform used in bitcoin transactions. This change could prevent losses that are due to one particular type of fraud. Some companies are applying for and receiving financing from multiple banks, but are using the same invoice as proof of collateral for all of the banks. This allows the company to receive much more financing than they should be able to receive, and the banks lose a lot of money if the company defaults on their loan. This fraud is similar to if an individual were to receive several mortgages from various banks for a single house. If the individual were to default on their mortgage, they would keep a lot of cash, and the banks would each be left with only a portion of a house as collateral. The losses due to this financing fraud have been close to $700 million for banks such as Standard Chartered Plc and JPMorgan Chase.
Read more »
Posted by Ryan Sommerfeldt at 4:19 PM No comments: