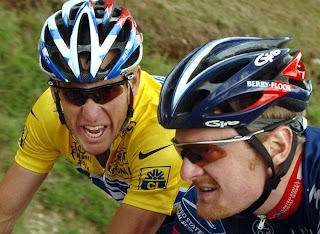 The competition between Lance Armstrong and Floyd Landis isn't in the French Alps but, instead, may be in a U.S. federal court room. The Wall Street Journal reported today that Lance's troubles with Landis and the Department of Justice are still ongoing. Floyd was astute enough to file a whistleblower lawsuit against Lance under the Federal False Claims Act which allows whistleblowers to collect up to 30% of any recovery by the Federal Government if the government sues an individual for defrauding them. When Lance was sponsored by the U.S. Postal Service he was prohibited from doping by his contract with the USPS. Unfortunately for him, just when Lance probably would like to pay his last legal bill, it sounds like he may be supporting his all-star legal team for some years to come. Here's what the Wall Street Journal has to say about it...

Earlier this year, a VP at Goldman Sachs, Greg Smith, resigned and published his resignation letter in the New York Times. In his letter he laid out claims that Goldman's business model is to consciously rip off their clients. 60 Minutes recently did a story on Smith and interviews him along with numerous other individuals. Smith has recently published a book titled "Why I left Goldman Sachs." Goldman officials claim that Smith has a personal vendetta against his employer. On the other hand, Smith is not the first person to criticize Goldman or the investment banking industry for unethical business practices. Many trace some of the major economic downturns of our times back to this industry including major frauds like Enron and Worldcom as well as the mortgage meltdown. Check out the 60 Minutes story if you're interested in hearing more from Smith and his allegations against Goldman.
Posted by MZ at 6:52 PM No comments: