Lance Armstong Investigation: Have I Heard From Him?

I get this question on a regular basis. People have heard that he tries to intimidate and bully anyone who says anything negative about him. Well, the short answer is that I haven't heard from him. If I do, you will be the first to know as I'll blog about it here.

Interestingly, another blogger about Lance's woes, Anna Zimmerman, did hear from him recently. Check it out here. It's complete with screenshots from Anna's twitter account. He started following her one day and contacted her. When she didn't respond right away he contacted her again.

She basically called his bluff as he asked to meet with her so he could share some thoughts and she said no thanks, you can just tell me what you want to tell me using the internet. Not surprisingly, Lance didn't respond...I think he's smarter than that.

Here is one of the screenshots from her blog: 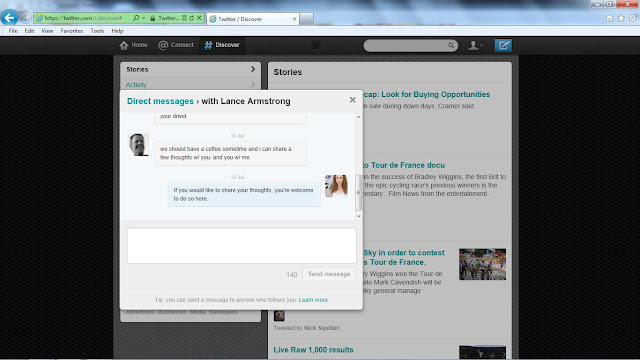 My guess is that she will be recording any phone calls he makes to her too. I know I would...

By the way, Anna's blog is full of some well thought out analysis of Lance's situation. I recommend reading her recent posts about Lance and LiveStrong. She lays it out pretty clearly why, in her opinion, Lance's lawsuit against USADA is baseless and that LiveStrong could lose its tax-exempt status for lobbying on Lance's behalf.

She appears to have a legal background and lives in Austin, Texas. Pretty gutsy woman if you ask me. I tip my hat to her.
Posted by MZ at 7:34 AM 2 comments:

Here are some details of the news reports as taken from Thursday's Wall Street Journal:

News reports suggest that LiveStrong donors should rest well knowing that their funds given to help fight cancer are being used to lobby Congress to pressure USADA in its investigation of Lance Armstrong.

Today's Wall Street Journal reported that a Congressional staff member has confirmed that "The...Texas-based charity known as Livestrong, sent a lobbyist to Capitol Hill last week to discuss the funding for the agency that has accused the retired cycling champion of cheating to win the Tour de France." Here are more details from the Journal:


Through the end of Fiscal Year 2011, the United States Congress appropriated $51.4 billion for the relief and reconstruction of Iraq. Congress also commissioned the Special Inspector General for Iraq Reconstruction (SIGIR) to perform an audit of the expenditures.

SIGIR released a final forensic audit report last Friday. The extent and nature of some of the frauds and waste encountered make it appropriate that the report was released on Friday the 13th. You can access the full report here. My reading of the report suggests a mixed signal. On the one hand, SIGIR finds relatively effective controls over the payment process. On the other hand, SIGIR found several prevalent and serious control weaknesses in the procurement process.

To quote the report:

This news is about a day old now but I just got time to put it up for those of you following the Lance Armstrong investigation.

After Rep. Sensenbrenner (Rep. Wisconsin--Trek Bicycles district) put pressure on USADA on Thursday (see this link), I was pleasantly surprised to see John McCain come out in support of USADA. Here are a few more details from an article on VeloNation along with my usual commentary.

McCain issued the following statement that you can find online on McCain's website and in various news articles:

Earlier this week it was reported that Peregrine Financial Group was short about $220 million of the reported $225 million of customer funds. Today the text of a suicide note written by the CEO, Russell Wasendorf Sr., shows that Wasendorf forged documents for twenty years to conceal his fraud.

Below is the text of the note as reported on various news sources. In the note, Wasendorf lays out, in detail, how he committed the fraud.

Well, you have to hand it to Lance. Just when it looks like he will receive some consequences for the massive doping that his teammates have allegedly accused him of, cases are closed and politicians come to his rescue. First the DOJ drops his case earlier this year with virtually no explanation and now a Congressman from Wisconsin is putting pressure on USADA to back off. Amazing!

Here is some more information from an article on VeloNews:

The congressman, James Sensenbrenner, wrote a letter to the Office of National Drug Control Policy (ONDCP) which oversees USADA and stated:

“The U.S. Congress has no role in determining whether an individual athlete doped, but we do have a great interest in how taxpayer money is spent,” Sensenbrenner wrote in his letter to Kerlikowske.


While Bernie Madoff has claimed the bulk of the spotlight in fraud related news over the past few years, Allan Stanford's fraud isn't just another Ponzi scheme, as highlighted in this interesting article by DailyFinance.  Here are some of the highlights:

Lance Armstrong Investigation: Has He Been Tested Over 500 Times?

I tip my hat to a group of skeptics who have put together an analysis of Lance's claim that he has been "tested over 500 times and not once tested positive." Before we get to the analysis, here are a few of the actual quotes (in addition to the one above) that are attributed to Lance or his legal team in this regard. You can find similar quotes by a simple Google search.

"Lance is the most tested athlete, amateur or professional in the history of sport. We don’t know exactly the number but we think it’s around 300 separate tests that he’s undergone and he has never had a positive test." (Tim Herman, Lawyer to Lance Armstrong, July 2010)

As it turns out, the number of tests he has had over the period from 1990 - 2010 appears much closer to Tim Herman's quote in 2010: 300. Here are some key points from the analysis documented at Cyclismas.com...

While Lance Armstrong is fighting USADA to try to stop them from taking away his seven Tour de France titles, three of those who have been accused with Lance as being part of a doping conspiracy have, apparently, quietly conceded to receive lifetime bans from any involvement in cycling. According to VeloNation, the three include two doctors: Michele Ferrari and Luis Garcia del Moral and the team trainer, Pepe Marti. The article continued by saying:

Wow, this has to be some sort of record. Within seven hours of Lance Armstrong's team filing a lawsuit against USADA, a federal judge has dismissed the claim! I mean, I don't know how the judge could read the 80 pages in much less than seven hours! Here is a great quote from the judge (courtesy CyclingNews):


"This Court is not inclined to indulge Armstrong's desire for publicity, self-aggrandizement or vilification of Defendants, by sifting through eighty mostly unnecessary pages in search of the few kernels of factual material relevant to his claims."

The Court claimed that the lawsuit filed earlier in the day contained "allegations" which were separate to the case and therefore "the Court must presume, were included solely to increase media coverage of this case, and to incite public opinion against Defendants."

A footnote on the documents states the following:

"Contrary to Armstrong's apparent belief, pleadings filed in the United States District Courts are not press releases, internet blogs, or pieces of investigative journalism. All parties, and their lawyers, are expected to comply with the rules of this Court, and face potential sanctions if they do not."

I guess this judge wants to be on recored that he isn't going to be intimidated or allow Lance's high-priced legal team use his court to bully USADA via public opinion...I don't know about you but I'd like to meet this guy!
Posted by MZ at 5:31 PM No comments:

In a move that should surprise no one, Lance Armstrong has filed suit against USADA in an attempt to halt the doping charges he is facing. USADA's CEO responded with the following statement:


In an emailed statement, Mr. Tygart implied that Mr. Armstrong's legal action Monday was nothing new. "Like previous lawsuits aimed at concealing the truth, this lawsuit is without merit and we are confident the courts will continue to uphold the established rules which provide full constitutional due process and are designed to protect the rights of clean athletes and the integrity of sport," said Mr. Tygart.

My main question is whether this response is something you would expect from an innocent person or someone who is backed into a corner and sees his kingdom crumbling before him?
Posted by Aaron at 12:45 PM No comments:

Lance Armstrong Investigation: What Do His Reactions Suggest?

Today, numerous news organizations from VeloNation to NY Times have reported that an anonymous source has said that four of Lance's closest associates and former teammates have agreed to testify against him; each of the four are still racing. The reports also said that those who have agreed to testify will receive reduced sentences for their doping. The sentences will last six months and start after the season is over. This is essentially a slap on the hand since the riders have about six months before most of the big races start up again. Here is the list of those reported to be testifying: