Doping in Cycling: Some News that Caught My Eye

Today has two strange stories about cyclists who have been linked to doping that I just couldn't resist commenting on...

Here are a few more links to keep you up to date on the latest fraud-related news: 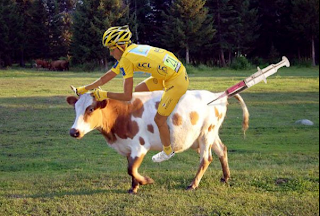 VeloNews is reporting that WADA lawyers have threatened to walk out of the Alberto Contador hearing which is supposed to rule this week whether the Spaniard will be found to have violated doping rules. Contador has a lot riding on this ruling (no pun intended) since the rule states that any clenbuterol found in his system is a violation that will cause him to lose his Tour de France title and ban him for up to two years. As we've covered on Fraudbytes previously, Contador claims he got the steroid from eating tainted beef during the tour.

The VeloNews article is short and highlights several claims by an anonymous source that Contador has biased the arbitration process in his favor. If you're interested in why WADA is so frustrated by this hearing, I'd recommend reading the article.

Outdoor Magazine published an extensive article on Lance Armstrong's LiveStrong Foundation today. I know they have been working on this for a while since the author, Bill Gifford, first contacted me in May 2011. Interestingly, I received several phone calls from investigative reporters around the same time--undoubtedly because they found these posts of interest.

As far as I can tell, Gifford's article is the first one to hit the press. His article notes why this may be the case by saying:


At least two other major publications have done serious reporting on Livestrong—that is, they started to. In both cases, Livestrong lawyers succeeded in shutting down the stories before they were published. They applied the same pressures to Outside, blitzing my editors with pissed-off e-mails, phone calls, and, eventually, a five-page letter from general counsel Mona Patel complaining about “Mr. Gifford’s conduct, professionalism, and method of reporting.” One of my crimes was a failed attempt to get a source to talk off the record, an ordinary journalistic practice. All of which now makes me wonder if I missed something.

I recommend reading the article if you're interested in LiveStrong and Lance. For those who want to get a flavor of the article, here are a few highlights that summarize the main conclusions:

Happy New Year! While I've never really been one for New Year's resolutions, I do intend to post more often over the next year. In the meantime, I've been collecting links to write about on FraudBytes and I've fallen a bit behind. In an effort to purge my queue, here are a few articles worth reading: