So when you read about a small, $50 million dollar, Ponzi scheme coming to light, you almost always read about some gullible investors who had no idea they couldn't make 50% returns in a legitimate business deal. The list of victims was recruited from friends or family in an affinity fraud and almost always includes a bunch of doctors and dentists who have too much money and think they need a bunch more but don't understand risk and return. It is very rare that the so-called sophisticated investors who understand risk and return get duped. The following story was sent to me by a former student, Robert Madsen, who pointed out that this is what makes this story incredible... 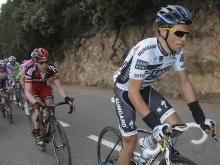 The UCI announce today that they will put their foot down in the Alberto Contador-clenbuterol case and has appealed his decision to the Court of Arbitration for Sport. As you know, this case first came to light last Fall after it was announced that Alberto failed some tests during last year's Tour de France which showed that he had trace amounts of clenbuterol in his system during the tour. Interestingly, the clenbuterol just showed up one day in very small amounts.

As I have blogged earlier, soon after we learned Alberto had clenbuterol in his system it was also revealed that Alberto also had plasticizers in his system. A new, unapproved, test for plasticizers was used to see if Alberto had been blood doping and it appeared he was. However, the test was not yet an approved part of the regulators' arsenal of tools that they could use to find a cheater. Even so, the word was that the plasticizer test could be used to shed light on another test, as it appeared to in this case. The plasticizer theory goes like this:

Madoff's Dealings with the Mets: Lookin' Shady to Me

The New York Mets have made the news recently but, unfortunately for them, it's not because their spring season is boding well for the rest of the season. Instead, the Mets are finding serious opposition is coming from the trustee in the Madoff case, Irving Picard, who is suing the Mets' owners, the Wilpon and Katz families, for $1 billion.

As it turns out, the Mets may have thought their biggest rivals were  the Yankees or the Phillies, but this year, they may start wondering if Picard is working for one of their rivals. Picard's amended case is 381 pages long and is likely to be a bigger challenge to the organization than any of those teams can muster. From what I can tell, the most potentially damning allegation in the case is Picard's contention that the Mets' owners knew Madoff was accustomed to doing shady business and that he transacted some such business with the owners. Here are some details that may pose a challenge to the owners as stated in a recent NY Times article on the matter:

In the last week, some news agencies have reported that the PCAOB is investigating the role of auditors in the financial crisis. It appears that auditors have been able to avoid much scrutiny from the latest economic meltdown whereas when the dot-com/telecom meltdown took place around the turn of the millennium, auditors took much of the blame. Below is a rundown of the two recommended regulatory changes that are being talked about in the news followed by a short discussion of changes that I would make if I was in charge.

Barry Minkow, the mastermind behind the ZZZZ Best fraud, will plead guilty to one count of insider trading, according to the WSJ.  Minkow spent seven years behind bars for his crimes related to the ZZZZ Best fraud, and since serving his time has worked as a minister for a California church and as a fraud buster.  Minkow has received accolades from the FBI for his role in exposing a number of frauds.  To fund his fraud busting operation, Minkow would short the stock of the companies he investigated just prior to publicly releasing his reports on the questionable activity of those companies.  In one of those cases, it appears that Minkow traded on privileged information.

Winners and Losers in the Madoff Case

Irving Picard, the trustee in the Madoff case, was in court last week as a panel of three judges heard arguments on whether net winners in the Madoff case ought to be able to collect money from the government. Net winners are those who took more cash out of Madoff's funds than they put in. Apparently, there are several of these guys who think they should get more money. Hmmmm.....

The WSJ had this to say about the case: "The judges' decision is likely to determine which Madoff customers may collect up to $500,000 apiece from the Securities Investor Protection Corp., an industry association created under federal law to insure investors in failed brokerages. It is also expected to affect how to divide billions of dollars Mr. Picard is recovering through legal settlements with people who withdrew money from the Ponzi scheme."

Now, it seems just a bit greedy to me that investors who got more money from Madoff than they put in would also be trying to collect from the taxpayers simply because Madoff sent them a statement showing they had more fictitious profits than they had already withdrawn! Apparently, the judges showed signs of wonder too as the WSJ reported the following:

Some Thoughts on Sports, Fraud and Life


From my limited perspective sitting in my office in Provo, Utah, there have been two main events that have captured the national sporting news this week: 1) Brandon Davies and BYU basketball and 2) the Sports Illustrated / CBS News investigation of top 25 football programs.  Given all the blogging I've done on fraud in sports (especially pro and amateur cycling) over the past year, I thought I'd offer a few comments about this news. 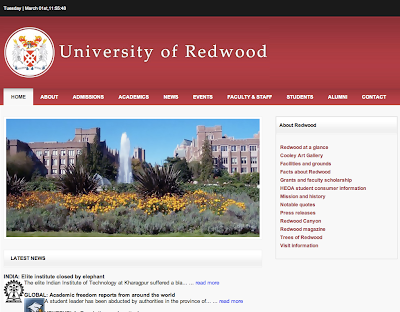 As global trade increases, fraudsters are presented with new opportunities to make money.  The influx of international students to US institutions of higher education has apparently created one such opportunity to commit fraud.  Want to create a fake school to scam international students out of application fees?  Simple--copy an existing school's web site, change the name of the institution and some other minor details, promote your school on international forums and blogs, and sit back and watch the application fees roll in.  Finally, send applicants a rejection letter/email after a few weeks and your bank account has suddenly gotten bigger with little concern that your victims will ever know they were scammed.