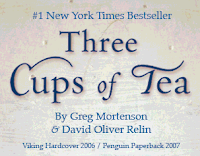 A more direct question might be whether Lance Armstrong's charitable foundation, LiveStrong, is managed like Greg Mortenson, author of "Three Cups of Tea" is managing his charity, The Central Asia Institute (CAI). Mortenson became famous and influential when he published his inspiring stories about how he came to dedicate his life to helping educate women in Afghanistan and Pakistan in "Three Cups of Tea" and its sequel, "Stones Into Schools: Promoting Peace with Books, Not Bombs, in Afghanistan and Pakistan." However, yesterday Mortenson was accused of committing fraud to create his initial success and lying about how he has used donations given to his charity to help educate the poor in these countries. According to a 60 Minutes report, Mortenson has been using his charity as a tool for self promotion and dipping into the piggy bank. In addition...
60 Minutes reported yesterday that Mortenson is being accused of all sorts of fraud including fabricating his initial story to lying about the schools he and his organization has built in the middle east.
If this story about Mortenson is true, it is very sad. Mortenson has done a lot of good for educating the women of Afghanistan and was awarded honors in Pakistan for his work there. The issue isn't whether he has done good. Rather, it is about whether he lied to get the ability to do good and whether he is using the money given to his organizations for purposes that were not intended by the donors. Mortenson refused to talk to 60 Minutes even though they repeatedly asked him for comment and even approached him on camera.
Similarly, the issue with Lance Armstrong isn't whether he has done good for cancer victims, but rather, whether he first cheated to beat his opponents then used his fraudulent titles to help promote an organization that appears to do good but also enriches a fraudster. It's actually a strategy that has been used by fraud perpetrators many times and, unfortunately, it appears in places where it is least expected such as with Greg Mortenson. Overall, the accusations against Mortenson are not too far from what the seven-time Tour de France champion is being accused of: lying, cheating and promoting himself by engaging in fraud.
In yesterday's 60 Minutes story, they showed an interview with Daniel Borochoff, President of The American Institute of Philanthropy (AIP). AIP's website proclaims it is "a  nationally prominent charity watchdog service whose purpose is to help donors make informed giving decisions." Borochoff was quoted in the 60 Minutes video as saying that Mortenson's charity, The CAI, has been very poorly managed and that millions of dollars given to the charity have been used largely by Mortenson for self promotion and for book sales which don't go back to the CAI.
I decided to look up the AIP's report on LiveStrong. Although the AIP doesn't go into a lot of details on LiveStrong, they are critical of how inefficient the organization is and groups it as one of many "cancer charities" that are in need of a "dose of organizational chemotherapy." In reference to LiveStrong's predecessor organization, The Lance Armstrong Foundation, AIP says:

The Lance Armstrong Foundation (now LiveStrong), founded by the champion bicyclist and cancer survivor of the same name, is celebrating its 10-year anniversary this year. Wouldn’t you think a charity that receives massive publicity for having one of the most popular causes and most admired celebrities as the face of the organization would be able to easily raise lots of money? Unfortunately this is not the case. LAF spent as much as $45 to raise each $100... (A)fter spending $10 million in solicitation costs, the group brought in only $22 million in contributions, according to AIP’s analysis of LAF’s 2005 financial statements.

In other words, LiveStrong appears to be spending a lot of money to get contributions which should, on the face of it, come pretty easily to this organization. In fact, when this report was written, Lance's foundation spent 45 cents to raise a dollar! That's outrageous if you ask me!

My guess is that if we got a detailed report from AIP they would say that Lance is spending a lot of LiveStrong's money to travel in a private plane, stay in nice hotels, eat the finest meals, and promote himself along with his charity.

I'm not saying that LiveStrong hasn't done a lot of good, but it has likely done so while spending a lot of money to enrich the life of its founder. In any case, I'd be curious to see what 60 Minutes has to say about Lance and his foundation including a more detailed analysis of how LiveStrong's funds are being used.

I suspect we would find some dirt underneath all the bright yellow bracelets...
Posted by MZ at 1:49 PM