A new, double-blind, study shows that using HGH along with EPO injections and testosterone patches can, in extreme cases, lead to extensive nose growth. The study shows that when these drugs are used over a lengthy time period--say 15 years--the lateral nasal cartilage can, in the words of one author, "grow like a weed." Apparently, the "rapid and extensive" nose growth can come on quickly and often starts growing shortly after the person quits using the performance enhancing drugs.

The authors showed pictures of one of the participants in the study who had an excessively long nose caused by over 15 years of using every type of performance enhancing drug that he thought would benefit him. You can see the picture below. 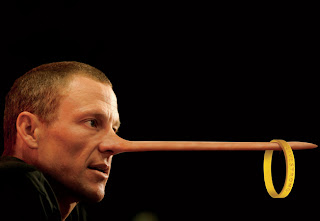 Okay--I better stop there before my nose starts growing. In truth, I found this photo in an article that I read in August and have been wondering how I could use it on the blog. I decided to get it off my desktop today and thought you might want to see it.

With that said, I do think there is truth to the correlation between doping among athletes and nose growth. The true correlation is that when an athlete decides to dope, he or she has to live a lie and rationalize that breaking the rules is justified. At that point, the doper becomes a liar and a fraud. We've seen it many times and only rarely do the dopers admit their fraud when they get caught. The most notable in cycling was Floyd Landis but we have many other examples of those who were caught and tried to lie their way out of it including Tyler Hamilton, Jan Ullrich, Ivan Basso and others.
Posted by MZ at 11:20 AM